From Wikipedia, the free encyclopedia
The Chicago Symphony Orchestra (CSO) is an American orchestra based in Chicago, Illinois. It is one of the five American orchestras commonly referred to as the "Big Five".[1] Founded in 1891, the Symphony makes its home at Orchestra Hall in Chicago and plays a summer season at the Ravinia Festival. The music director is Riccardo Muti, who began his tenure in 2010.

In 1891 Charles Norman Fay, a Chicago businessman, invited Theodore Thomas to establish an orchestra in Chicago. Conducted by Theodore Thomas under the name "Chicago Orchestra", the Orchestra played its first concert October 16, 1891 at the Auditorium Theatre. It is one of the oldest orchestras in the United States, along with the New York Philharmonic, the Boston Symphony Orchestra and the Saint Louis Symphony Orchestra.
Orchestra Hall, now a component of the Symphony Center complex, was designed by Chicago architect Daniel H. Burnham and completed in 1904. Maestro Thomas served as music director for thirteen years until his death shortly after the orchestra's newly built residence was dedicated December 14, 1904. The orchestra was renamed "Theodore Thomas Orchestra" in 1905 and today, Orchestra Hall still has "Theodore Thomas Orchestra Hall" inscribed in its façade.
In 1905, Frederick Stock became music director, a post he held until his death in 1942. The Orchestra was renamed "Chicago Symphony Orchestra" in 1913.
Subsequent music directors have included Désiré Defauw, Artur Rodziński, Rafael Kubelík, Fritz Reiner, Jean Martinon, Sir Georg Solti, Daniel Barenboim and Riccardo Muti.
Maestro Barenboim resigned from his post in 2006 in order to focus on his career in Europe with the Staatskapelle Berlin orchestra and the Staatsoper Unter den Linden opera company, La Scala in Milan, and also with the West-Eastern Divan Orchestra, which he co-founded. Barenboim's final concerts leading the Chicago Symphony Orchestra took place on June 15–17, 2006. On April 27, 2006, the orchestra named Bernard Haitink as principal conductor and Pierre Boulez to the post of conductor emeritus "while [the] music director search continues."[2] These appointments began in the 2006–2007 season.
On May 5, 2008, Chicago Symphony Orchestra Association President Deborah Rutter announced that the orchestra had named Riccardo Muti as its 10th music director, starting with the 2010–2011 season, for an initial contract of 5 years.[3]
The Orchestra has also hosted many distinguished guest conductors, including Leonard Bernstein, Aaron Copland, Edward Elgar, Morton Gould, Walter Hendl, Erich Kunzel, Erich Leinsdorf, Charles Munch, Eugene Ormandy, André Previn, Sergei Prokofiev, Sergei Rachmaninoff, Maurice Ravel, Arnold Schoenberg, Leonard Slatkin, Leopold Stokowski, Richard Strauss, George Szell, Michael Tilson Thomas, Bruno Walter, and John Williams. Many of these guests have also recorded with the orchestra.
The three most frequent guest conductors of the Orchestra have been Carlo Maria Giulini, Claudio Abbado, and Pierre Boulez.
Music performed by the Orchestra has been heard in movies, including Casino conducted by Sir Georg Solti and Fantasia 2000 conducted by James Levine.
The Chicago Symphony holds an annual fundraiser, originally known as the Chicago Symphony Marathon, more recently as "Radiothon" and "Symphonython", in conjunction with Chicago radio station WFMT. As part of the event, from 1986 through 2008, the Orchestra released tracks from their broadcast archives on double LP/CD collections, as well as two larger sets of broadcasts and rarities (CSO: The First 100 Years, 12 CDs, 1991; CSO in the 20th Century: Collector's Choice, 10 CDs, 2000).
Beginning September 22, 2012, the musicians of the orchestra staged a labor strike, citing a breakdown in negotiations over their labor contract.[4] The strike lasted only 48 hours and a new contract was ratified by the musicians shortly thereafter on September 25, 2012.[5]

The Chicago Symphony Orchestra maintains a summer home at Ravinia in Highland Park, Illinois. The Orchestra first performed there during Ravinia Park's second season in November 1905 and continued to appear there on and off through August 1931, after which the Park fell dark due to the Great Depression. The Orchestra helped to inaugurate the first season of the Ravinia Festival in August 1936 and has been in residence at the Festival every summer since.
Many conductors have made their debut with the Chicago Symphony at Ravinia, and several have gone on to become the artistic director, or primary summertime guest conductor at Ravinia, including Seiji Ozawa (1964–1968), James Levine (1973–1993), and Christoph Eschenbach (1995–2003). As of 2005, James Conlon holds the title of Ravinia music director. 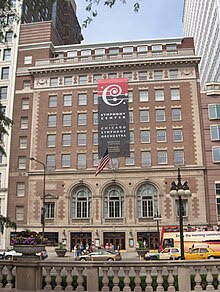 The Chicago Symphony has amassed an extensive discography. Recordings by the CSO have earned 62 Grammy Awards from the National Academy of Recording Arts and Sciences. These include several Classical Album of the Year awards, awards in Best Classical Performance in vocal soloist, choral, instrumental, engineering and orchestral categories.
On May 1, 1916, Frederick Stock and the orchestra recorded the Wedding March from Felix Mendelssohn's music to A Midsummer Night's Dream for what was then known as the Columbia Graphophone Company. Stock and the CSO made numerous recordings for Columbia Records and the Victor Talking Machine Company, renamed RCA Victor in 1929. The Chicago Symphony's first non-acoustic electrical recordings were made for Victor in December 1925, including a performance of Karl Goldmark's In Springtime overture. These early electrical recordings were made in Victor's Chicago studios; within a couple of years Victor began recording the CSO in Orchestra Hall. Stock continued recording until 1942, the year he died.
In 1951, Rafael Kubelík made the first modern high fidelity recordings with the orchestra, in Orchestra Hall, for Mercury. Like the very first electrical recordings, these performances were made with a single microphone. Philips has reissued these performances on compact disc with the original Mercury label and liner notes.
In March 1954, Fritz Reiner made the first stereophonic recordings with the CSO, again in Orchestra Hall, for RCA Victor, including performances of two symphonic poems by Richard Strauss: Ein Heldenleben and Also sprach Zarathustra. Reiner and the orchestra continued to record for RCA through 1962. These were mostly recorded in RCA's triple-channel "Living Stereo" process. RCA has digitally remastered the recordings and released them on CD and SACD. Jean Martinon also recorded with the CSO for RCA Victor during the 1960s, producing performances that have been reissued on CD.
Sir Georg Solti recorded with the CSO primarily for Decca Records. These recordings were issued in the U.S. on the London label and include a highly acclaimed Mahler series, recorded, in part, in the historic Medinah Temple -- some installments were recorded in the Krannert Center in the University of Illinois (Urbana, IL), as well as in the Sofiensaal in Vienna, Austria. Many of the recordings with Daniel Barenboim have been released on Teldec.
In 2007, the Chicago Symphony formed its own recording label, CSO Resound. After an agreement was reached with the Orchestra's musicians, arrangements were made for new recordings to be released digitally at online outlets and on compact disc.[6] The first CSO Resound CD, recording Bernard Haitink's rendition of Mahler's Third Symphony, was released in the spring of 2007. The following releases were Bruckner's Seventh symphony conducted by Haitink, Shostakovich's Fifth by Chung, Mahler's Sixth and Shostakovich's Fourth by Haitink.

The Chicago Symphony first broadcast on the radio in 1925. Though often sporadic, there have been broadcasts ever since. With the 1965-1966 season, Chicago radio station WFMT began regular tape-delayed stereo broadcasts of CSO concerts, running through the 1968-1969 season. They resumed from 1976 through the 2000-2001 season before ceasing due to lack of sponsorship. In 2007, the broadcasts once again resumed with a 52-week series. The broadcasts are sponsored by BP and air on 98.7 WFMT in Chicago and the WFMT Radio Network. They consist of 39 weeks of recordings of live concerts, as well as highlights from the CSO's vast discography.[6]
The CSO appeared in a series of telecasts on WGN-TV, beginning in 1953. The early 1960s saw the videotaped telecast series Music from Chicago, conducted by Fritz Reiner and guest conductors including Arthur Fiedler, George Szell, Pierre Monteux, and Charles Münch. Many of these televised concerts, from 1953 to 1963, have since been released to DVD by VAI Distribution.
Georg Solti also conducted a series of concerts with the Chicago Symphony that were broadcast in the 1970s on PBS.

Frederick Stock founded the Civic Orchestra of Chicago, the first training orchestra in the United States affiliated with a major symphony orchestra, in 1919. Its goal is to recruit pre-professional musicians and train them as high-level orchestra players. Many alumni have gone on to play for the CSO or other major orchestras.
The Civic Orchestra performs half a dozen orchestral concerts and a chamber music series annually in Symphony Center and in other venues throughout the Chicago area free of charge to the public.