How to Submit Your Poetry? 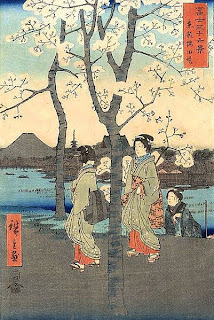 Haiku are short, brilliantly vivid poems containing visually complete descriptions of moments in a poet’s experience. In the space of their original 17 Japanese syllables, haiku express worlds of profound emotion and philosophical insight. Simple on the surface, yet fascinatingly complex on close study, Haiku have universal appeal and the number of languages into which they have been translated testify to this.
Much, though not all, early Japanese poetry was written by nobility, and despite the strict conventions of behaviors imposed on courtiers of the 8thto the 11th centuries, much of their poetry still radiates inspiration and sparkle today.
Nature images, such as cherry blossom, in early Japanese poetry became one of the most characteristic features of the canon. In other poems such as this by the 8th centaury poet Takechi no Kurohito, a note of melancholy suffuses the poet’s vivid perception, and the snapshot of natural beauty is modulated by the suggestion of human activity, a technique often used by Haiku poets many centuries later.
Travelling and lonely, I see beneath a hill
A boat painted with red clay rowing to the other side.
- Kurohito
Writers of the medieval period in Japan, from roughly the 8th to the 13th centuries, produced an enormous literature of love poetry. Most of the poems in Lady Murasaki’s prose classic “The tale of Genji” were short verses of longing, sadness or reminiscence exchanged between friends of lovers. The following verse traded between Prince Genji and the Japanese Empress at the death-bed of Genji’s wife are characteristic. His poem comes first; hers answers:
In the haste we make to leave this world of dew
May there be no time between the first and last.
- Genji
A world of dew before the autumn winds,
Not only theirs, these fragile leaves of grass
-Empress
The inherent sadness in life’s transient incompleteness is a theme that would preoccupy the great Haiku Poets.
A knowledge of classical poetic tradition represented in the 8th century anthology Man’yoshu and the 10thcentury Kokinshu was indispensable to later poets writing haiku.
The term Waka – a word meaning “Japanese poem” came into use in the 9th century, to minimize the confusion with Chinese Poetry being read and written by educated Japanese people at a time during the T’ang Dynasty when Chinese arts threatened to become overly influential in Japan. It was during this period that Japanese imperial diplomatic and economic ties with Chinawere broken, and consequently Japanese writers were encouraged to pursue more local traditions and genres. Japanese people had been composing Waka for ceremonial occasions long before the advent of a literary culture, and even when writing becomes an established means of discourse, the recitation of Waka remained a public art and means of private communication.
The short form of Waka, later become known as Tanka, which grew to be the most popular poetic vehicle and Haiku developed from it.
The Kokinshu – whose ‘thousands of leaves’ represents the oldest poetic tradition in Japan. It was compiled around 920CE, where the poems are organized according to theme, divided into sections devoted to love and the four seasons. This ordering of topics became prescriptive and for many centuries determined the subjects that were deemed acceptable for study by the professional poets who made a living giving instruction in Haiku writing: the Haiku Masters.
Haiku Rules:
While some Haiku poets claimed a degree of personal freedom, most obeyed decreed compositional rules. First the Haiku consisted of 17 syllables, made of three phrases of five, seven and five syllables. Within this format, the Haiku was generally divided also into two parts standing in contrast or reversal to each other.
A poem might start with a traditional image such as cherry blossom, full moon or dew and then re-focus to a lower perhaps clashing image. A seasonal word (Kigo) was another prescriptive component of Haiku. Other rules underlined the subtler aspects of Haiku. If classical correctness could be ‘lowered’ to let in descriptions of ordinary life, it was, said Basho, important to ‘correct’ the ordinary, imbuing it with poetic exaltation (Fuga). In turn Fuga has to be used to express important ideas: the spiritual wealth within modest and simple things (Wabi); beauty, mystery and elegance (Yugen) as in the example below

Stillness and solitude –
Sinking into stones,
The trill of cicadas
- Basho
And melancholy sadness and tranquility (Sabi and Shori)
On a withered branch
A crow has settled.
Nightfall in autumn.
- Basho
Or in the spirit of poetic madness (Fukyo)
Let me show you,
You market people,
This hat filled with snow.
- Basho

And sometimes in shockingly comic ‘lightness’ (Karumi)
A bush warbler
Leaves its droppings on the rice cake
At the edge of the verandah.
-Basho
Emphasizing the shift in tone, a cutting word (Kireji) usually sits at the end of one of the phrases. The cutting word was often a semantically meaningless sentence-ending particle such as kana, ka, ya, heri or ran. Such word sounds did not themselves contribute meaning but acted both to divide the poem into two rhythmic halves and to set up a contrast between the two poem’s parts. A seasonal word Kigo was another prescriptive component of Haiku. Early classical literature contained a huge vocabulary of words that implied not only a season but an emotion appropriate to it. Spring, with its mood of optimism, was implied by cherry blossom and certain birds. The bright but often fatiguing summer was often suggested by flower and tree words. Autumn melancholy was expressed by ‘lonely’ images, such as a full moon, wind and dying leaves. Cold words like snow alluded to the hard experience of winter. Poets writing in the spirit of haikai added less refined seasonal words: Dandelion, garlic, horseradish and mating cats all connoted spring for example.
Some of the times, Haiku also shows of an acceptance of the life’s impermanence. The most famous Haiku Master Basho’s haiku some times also demonstrates the genuine Buddhist enlightenment. The following very famous Haiku by the most famous Haiku Master Basho expresses most vividly the truth – the enactment of both, the phenomenon, what is and its passing. In this Haiku, a creature living unconsciously, according to its nature, is shown in the context of the man made artifice of an old garden pond, highlighting the simple bare and eternally ordinary ‘is-ness’ of all existence in the present moment:
Old pond
A frog jumps in,
The sound of water

The Milestones…
After Basho, there have been many great poets who took Haiku to the greater heights …
Buson
The bite of my axe.
Sudden revelation –
There is life in this tree!
As Buson accepts his death quietly in this farewell poem
White plum blossoms,
Night turns to dawn –
The time has come

Kobayashi Issa
Alone among the shady bushes
A girl is singing
A rice planter's song
Masaoka Shiki
A river in summer
There’s a bridge here, but
My horse prefers water

Kaikyo
With useless authority
The great horned owl
Sits moon-eyed in daylight
Etsujin
I envy the tomcat:
How easily he lets go of
Love’s pain and longing
Ranran
The child cries at her breast.
And the mosquito also bites
The sleeping mother
Senna
With ink-stained lips,
The boy leaves his poem
For the cool outdoors

Greetings from The Purple Treehouse,
We redo Shashi's Haiku Form  post so that you can submit
Haiku
to our site, in celebrating Christmas and New Year of 2014-2015, Have Fun!

Posted by Iremonger Lindsay JacoBus Quinlan Pickens at 12:05 AM 55 comments: